This buggy was originally built by some kids in Nitro, West Virginia.  The body was a copy of a Meyers Manx done by a guy in St. Albans by the name of George Smolens, who also sold a frame which was made of light steel and bad welds! Coat hangers for welding rods! It originally had a turbo motor from a 1963 Spyder without the turbo and the dash was also used. It was very poorly done and dangerous to drive. My old friend and fellow car fool, Mike Stone, found the buggy for sale and bought it. The buggy's gas pedal arrangement was so bad it had two positions; off and full throttle! Mike almost took out the back of his garage trying to get it in. He immediately disassembled the buggy and began reengineering, redesigning and reassembling it.

The engine was basically sick, so I said let me take it home and see what I can do. We swapped the turbo heads, added some headers and began autocrossing it. The buggy eventually went to Charlotte, NC, with me when I moved there, and came back to Charleston, WV, when we moved back all in the span of three years. I didn't race it in Charlotte, as I had the '65 coupe up to a full blown autocrosser by then. The buggy was fun on the street and my kids loved it. The only picture I now have, circa 1974, shows my four kids,  from left to right: Matt, Rick Jr., Shayne and my oldest , Yvette with the buggy. I know my then wife took this picture because I would have whipped their butts for sitting on the car. Note the hard top and side curtains. They did not survive.

The Saga of the Corvair Dune Buggy 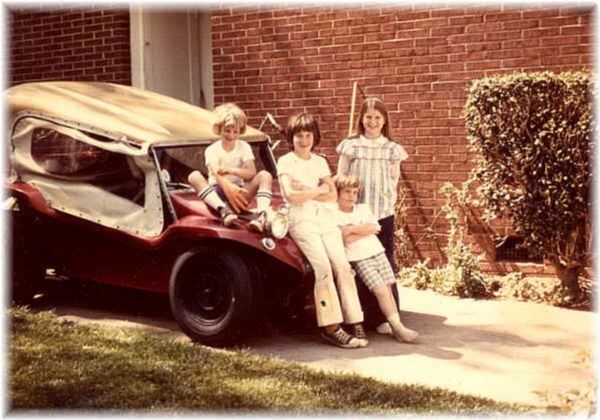 After moving back to West Virginia, I decided the nice engine I had in the '65 would do wonders in the buggy. It did! Mike and I autocrossed it and it was a lot faster that we were! It was very prone to do 180's in the blink of an eye! Later on, we sold it to another autocrosser and then he sold it to some kids, and it disappeared. I thought about it from time to time and my kids would remember it in conversation but I never thought I would see it again.

Fast forward to September 1993, to the annual Golden Oldies Labor Day Car Show at the state Capitol in Charleston. At that time, I had my 1988 Dodge Daytona Shelby Z Turbo, and I decided to put it in the show just for laughs. After getting set up at the car show, I asked my wife to watch the car so I could walk around and look at the other cars. As I looked around, I saw this red dune buggy  and I headed toward it. Getting closer, I said to myself, "This is like the one Mike and I had". 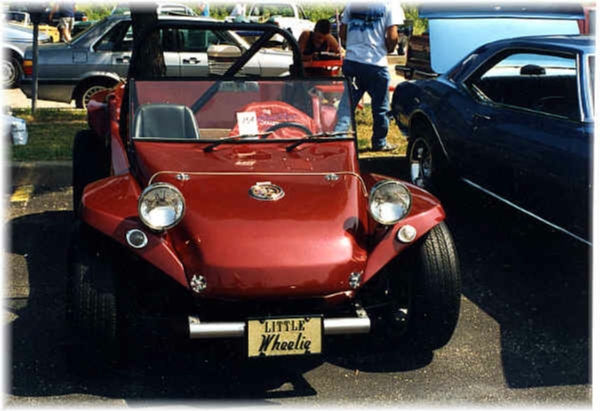 As I looked it over closer I saw it had Corvair front suspension. I was getting excited! I looked at the engine and it was a Corvair too. Now I was really excited! I kept looking for something that would positively identify it as our old buggy. Sure enough, I saw a piece of aluminum sheet metal over the oil cooler and that nailed it. 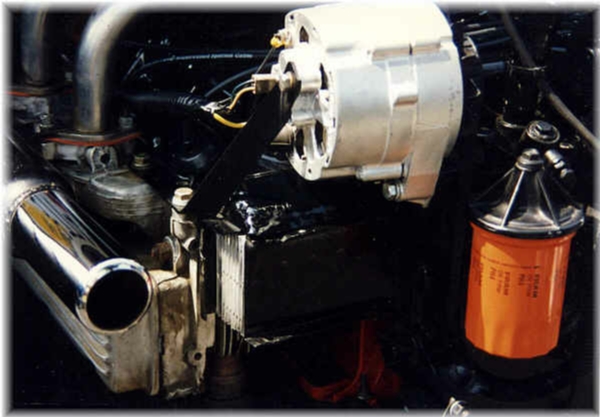 Then I saw the fuel pump boss plug I made from a bolt and an old pump. This was it! This WAS the old dune buggy!

I hurried over to our car to tell my wife and get my camera. As I walked back to the buggy to take photos and find the owner, who should I find looking at it but Mike Stone,  my friend and former co-owner! I was freaking out! You can see from our expressions that we both remember the good times we had with that little devil, and it was great to see that the car had survived the years  and was still appreciated and looked after. 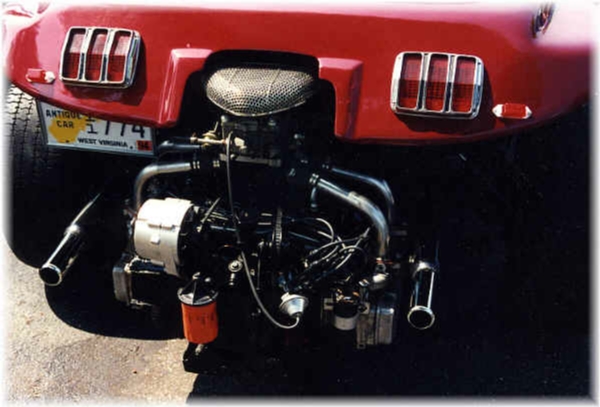 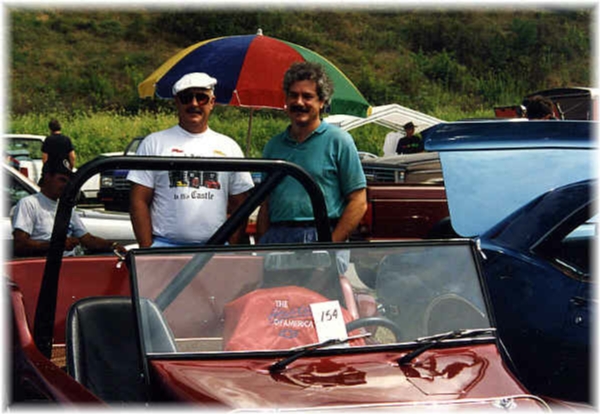 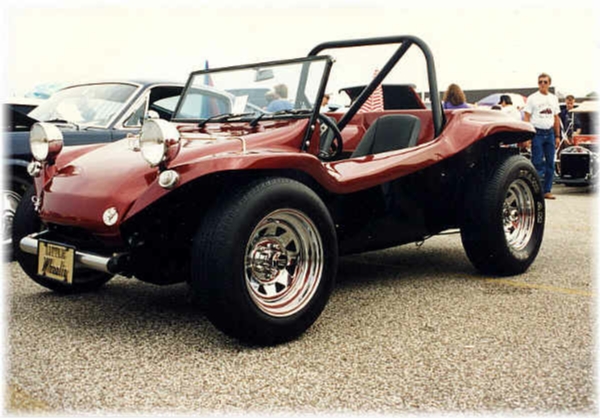 The original chrome tubes on the intake have held up well over the years. The buggy is all Corvair, except for the gas tank, which is from a Volkswagen, the flip up gas cap, which is from a Corvette, and the tail lights from a '65 Mustang. 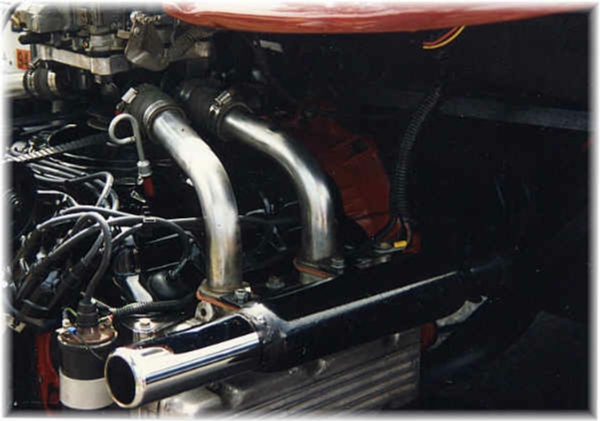 Note the front bumper,  which was made from a solid steel billet to put some weight on the front. The chrome cover was a piece of old scavenger pipe that Mike had. 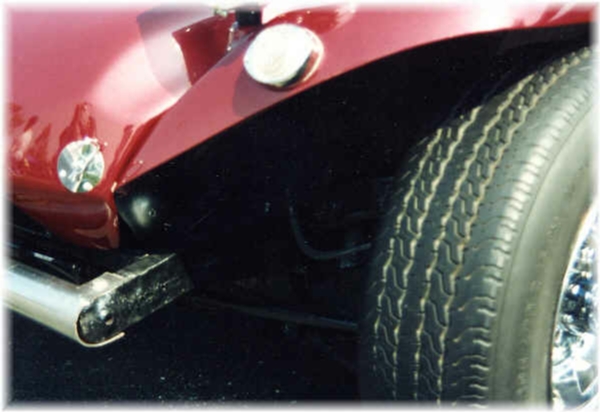 The '63 Monza Spyder instrument cluster is augmented by a couple of gauges in the dash. Note the small diameter, thick rimmed steering wheel, the custom pedals and the stock Corvair shifter. The aftermarket turn signal box is mounted to the dash below the cluster. 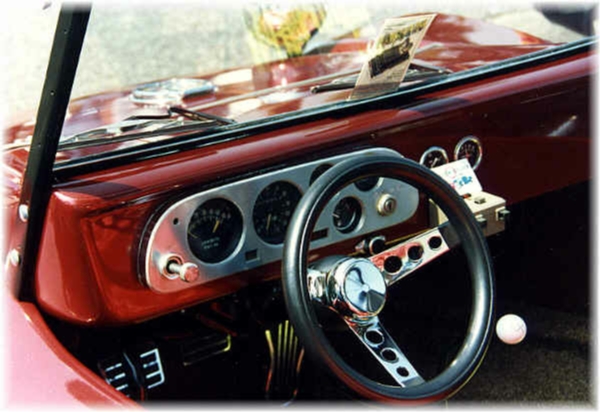 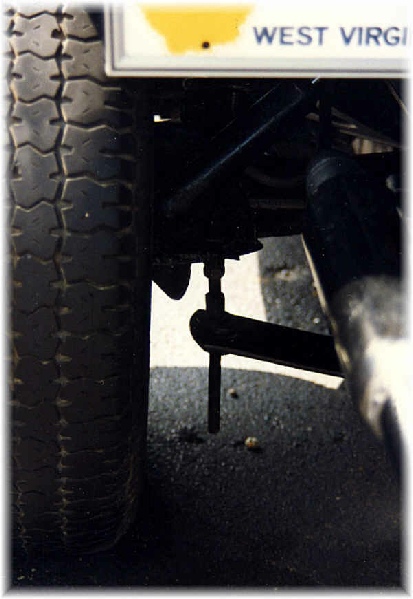 Mike fabricated the adjustable transverse spring on the ‘63 Corvair suspension, as well as the adjustable pitman arm, which had a series of mounting holes in it to allow several steering ratios.

The thing was very quick to react to steering or brake inputs and we often demonstrated it’s ability to do a 180 within it’s own length.

At one event, I was making a final banzai run when the left rear wheel brake cylinder froze as I braked hard on the last turn. It did an instant 180 inside the box and didn’t hit a cone. I remember sitting there with a death grip on the wheel wondering Just what the hell happened.

Another time, while making my last run at another event, I was really trying to beat Mike’s fast time. I was in the middle of the course on a tight sweeper all pumped up,adrenaline flowing at full force, making what was sure to be the killer run of the day when everything went silent and the buggy just stopped. Dead in the water. I sat there, glazed, eyes staring straight ahead thinking “What’ wrong with this picture?” We pushed the buggy off the course and immediately went to work on the problem, a stuck electric fuel pump. Mike beat me. His ex-wife used to call the buggy a “BUFFOON BUGGY”. At the time I think she was right but it was still a blast to drive.

Seeing the car again brought memories rushing back. Mike and I had a lot of fun with the buggy, like the time we removed the front brakes, for what reason I don't remember now, but it was interesting that of all the autocrosses we ran, none of the tech inspectors ever noticed that it was missing the front brakes. We eventually put them back on as it didn't work out.

A little later, the current owner joined us. He was a young guy and I started babbling to him about the history of his car. He was impressed and I promised him pictures and I also gave him my card and told him if he ever wanted to sell it, I wanted first refusal. He hasn't shown the buggy for a long time, who knows, it may come home yet. 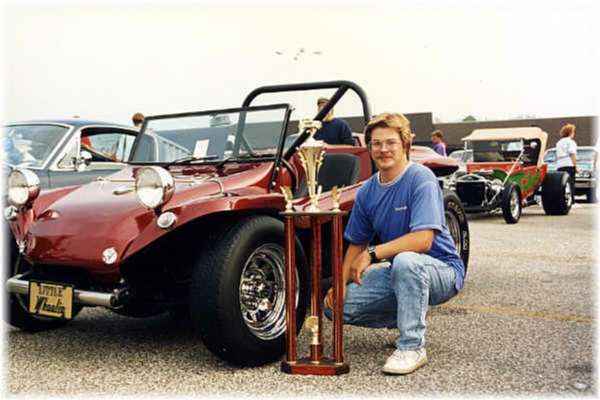 Mark Hicks, the current owner, named the car "Little Wheelie" because of a book of the same name he had when he was a kid. The book inspired him to own a real buggy,  the Little Wheelie that could, and did, haul home the hardware, that is. The buggy fit right in at the car show, drawing lots of curious stares amid the sea of T-buckets, classic Mustangs, and other hot rods and customs. It's easy to see why kids would fall in love with this toy! Big kids, too! Light weight, quick and made for play. I'm still waiting to hear from him.