The Monza suffered too many  West Virginia road salt winters, but it never let me down. These pictures were taken with an instamatic camera. I trimmed a couple of them to fit in my wallet and took them to Vietnam in 1966/67.  Notice the black-out paint on the rear grill. The stripes at this point were tape. I painted them later. 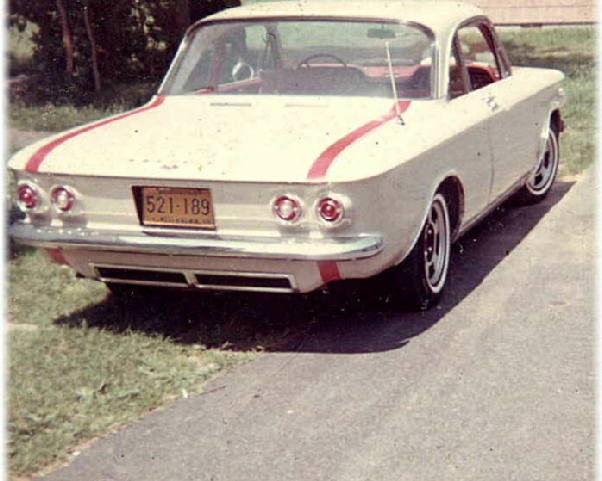 My first engine mod was shortening the air cleaner snout and painting the top silver.  I also painted the voltage regulator and added the vacuum gauge. I installed a dual exhaust kit I got from Alden's catalog. The car had two glass packs and it was LOUD, but I was proud.

This handsome, slim young man  was me on Easter Sunday, 1965, visiting a fellow Air Force buddy. I really haven't changed much over the years!

This is everything we owned, packed and ready to go back to West Virginia  for a thirty day leave before going to Vietnam in 1966 with a wife and two infants. We made it home with no trouble. Youth and ignorance are wonderful.

This was taken not too long before I junked the '64. I was trying to fix the rust, but it was beyond my talents at the time. She served us well. As always, I kind of wish I still had it.  By then I had my first late model 65, 140 speed. 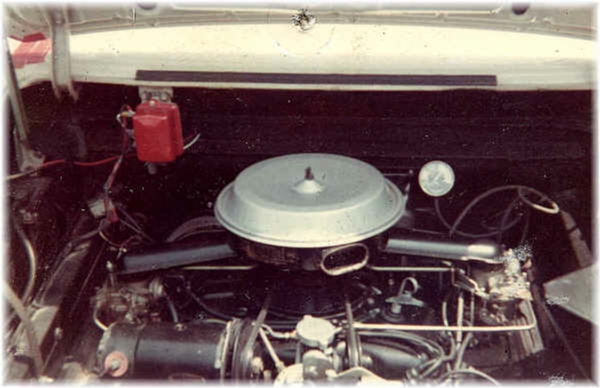 Note the “Mags”. I made these from pieces of  sheet aluminum from the air base. Some trick painting and chrome nut lug covers and you’re there! Also not the GT letters beside  the Monza badge. No money there, but a lot of desire. Wheels wells were painted silver. 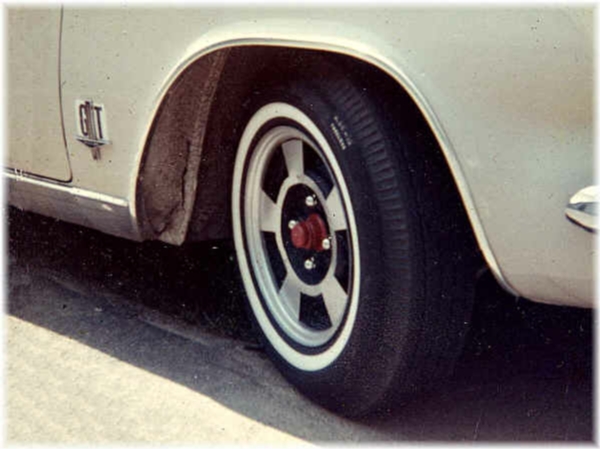 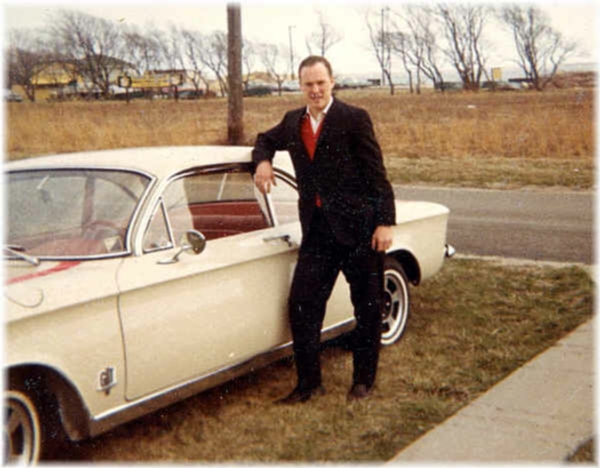 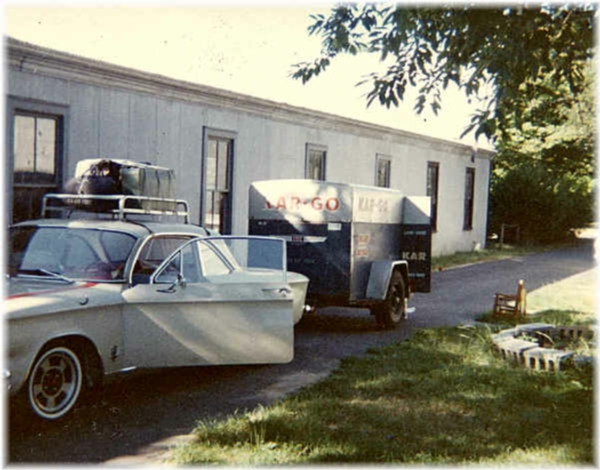 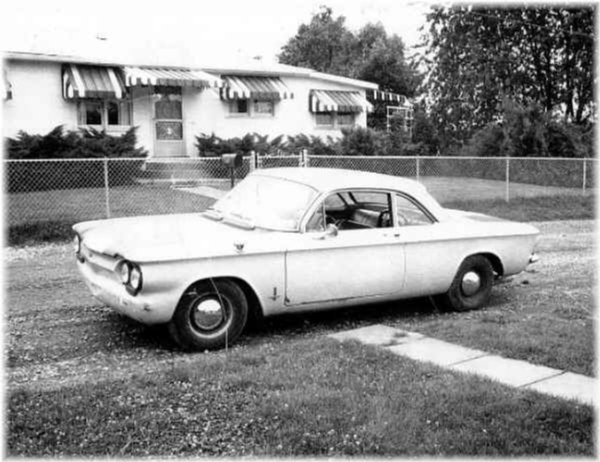 This picture was taken in 1965 at the apartment in Westhampton Baech where my wife and I lived near the air base on Long Island  NY, where I was stationed. 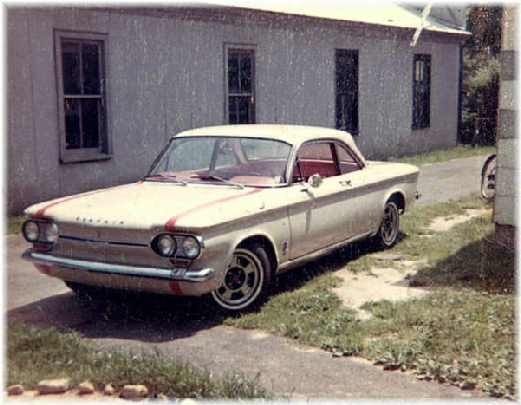 My Second Corvair was a Cyprus Green 1965 Monza sport coupe, 140,4 speed. I bought this car locally in St. Albans, WV, from a guy who needed the money. It had a little over 40,000 miles on it, and I got it cheap. I don’t remember the amount. It started out as the family car. I could get me, my wife and four kids in it. We took many a trip that way. It  made it easy to reach over into the back seat to smack any one of my three boys when they needed it. 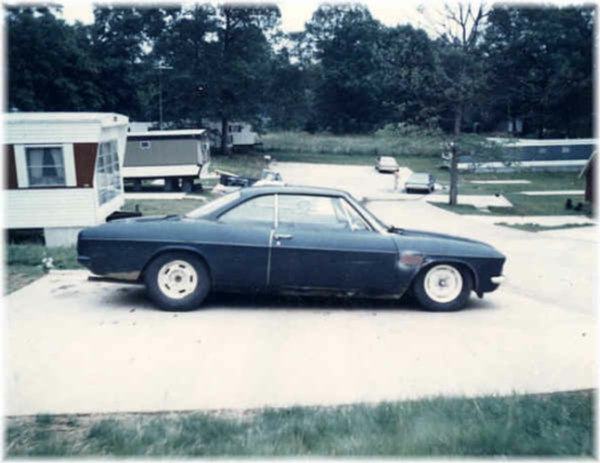 This was my first rebuild of the ol ‘65. Up on blocks in the front yard, this started out as a clutch repair and became a semi-restore. The neighbors got tired of seeing this. 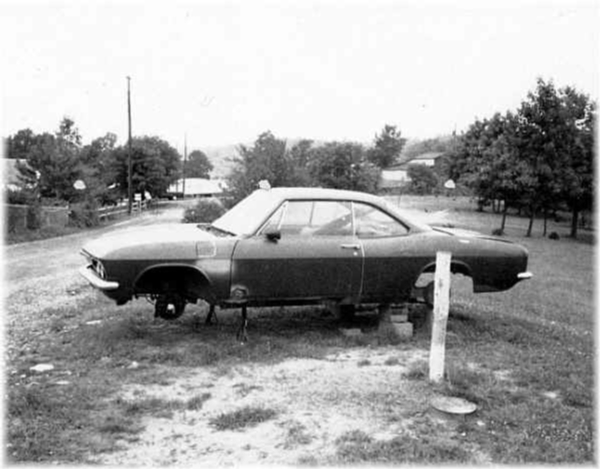 I drove the ‘64 until I finished this rebuild.  A photo of the interior, stripped and painted with a trunk paint, Grant wheel, Fiberglass seat from a dune buggy, 3 guages over the radio, and a Hurst T-handle shift knob. 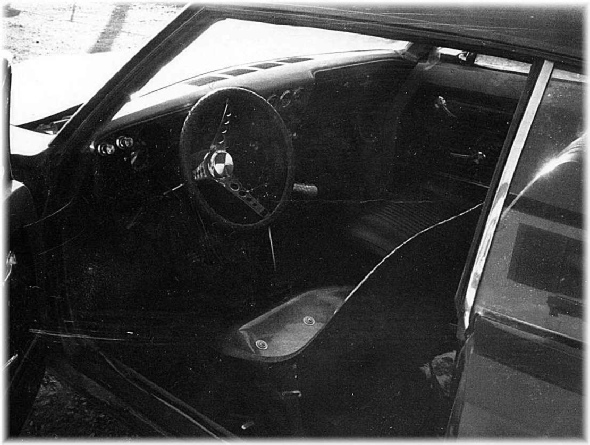 This is how it looked when I rolled it out of my Teays Valley Road driveway for the first road test about 11:00 at night. I did put a license plate on it, but no mufflers. It’s funny, now years later, I live on the other end of that same Teays Valley Road. 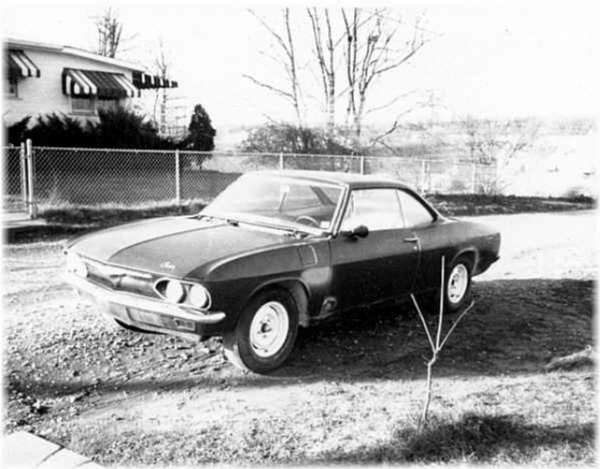 Note the home made trombone pipes. 2” pipe all the way through a Cherry Bomb muffler. 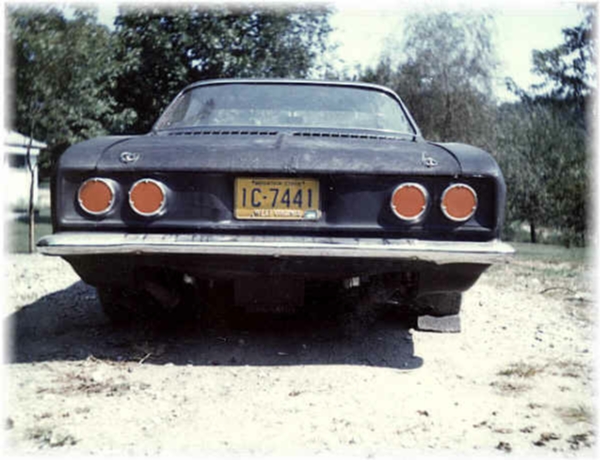 This was the second rebuild of the ‘65. The 140 was bored  .060 over with forged pistons, high volume oil pump and milled heads, 3 angle valve job, finned aluminum deep sump oil pan with  with a lowered pick-up, push rod tube baffles, recurved distributor, modified crankcase vent, remote oil cooler, electric fuel pump, a 500 cfm Holley 2 barrel on a 4 leg intake manifold, spring loaded Idler pulley, Racer Brown cam and lifters, custom length push rods and a lot of die grinder work on the inside of the block to enlarge oil passages and to smooth and remove casting flash. The reason for the rebuild was not knowing how to break in a new cam shaft which ate a lobe and scattered the pieces through out the engine. 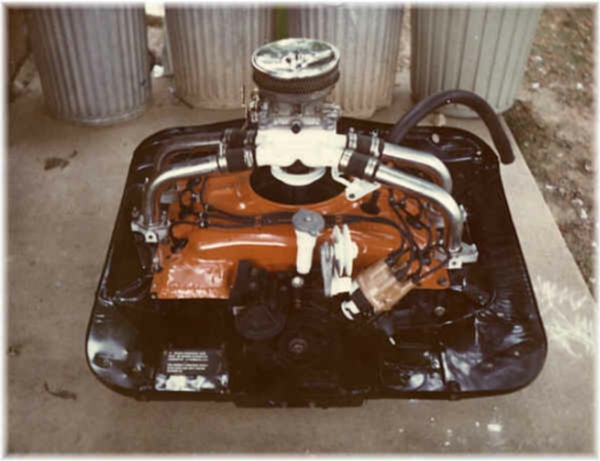 Here is an action shot of the ‘65 taken at the 2nd annual CORSA (Corvair Society of America) convention, held at Gaithersburg, Maryland, July 23, 1972. Chris Happe’ of Ontario Canada, took the picture which ended up on the cover of the March 1973, issue of the CORSA Communique’. As you can see, the Monza was decked out in flat black. 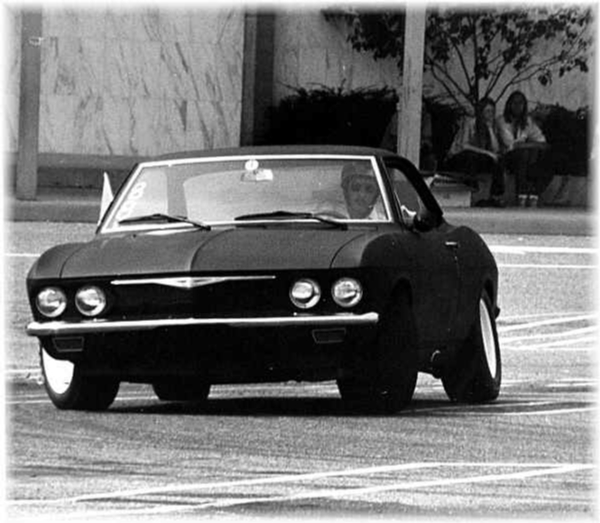 The Monza slowly but surely went from a daily driver to a dedicated auto cross car. In 1974, we were living in Charlotte, North Carolina. I joined the SCCA (Sports Car Club of America) and actually raced in several autocross events at Charlotte Motor Speedway. In the race held there in the spring by the local SCCA,this picture was taken by Gary Thibodaux, who came out to watch. 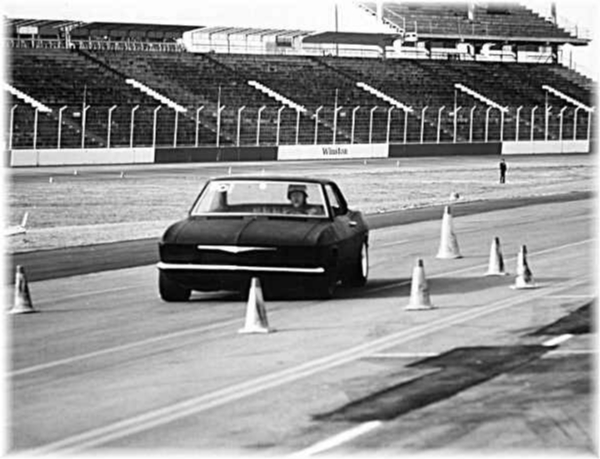 The old ‘65 s last days were spent in Charlotte. I got laid off, took another job in Dallas, Texas, and had the hulk taken away by the junk man after I stripped all the goodies out of it. The engine ended up in my Dune Buggy.

I found this Corvair in a storage lot in Bristol, TN. I bought  it as a parts car for my V8 project. I stripped it, then cut it up and hauled off the unusable pieces. It came in handy many times whild putting the V8 Vair together. There is always something the manuals do not show clearly or at all. I wish now that I had not disposed of it as it was not really as bad as I thought but, too late! 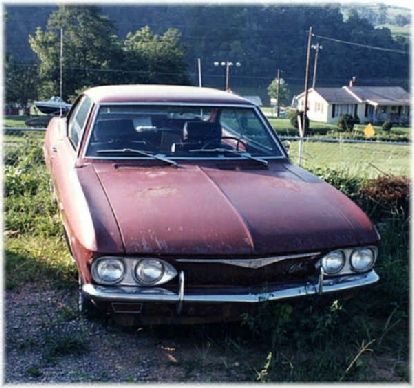 For some time I had been looking for the next addition to our Corvair stable. Since the 1969 model was a limited run, so to speak; and the convertible even more so, I decided it had to be a ‘69 vert with a 140 four speed. In May of 2002 We brought this one home. 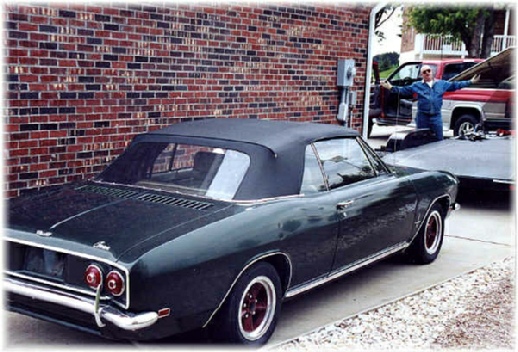 The green interior was original except for the carper. After driving it for the first time to a local cruise in, I was very aware that it was down on power and had a “slight miss” as the previous owner stated. A compression check confirmed my suspicion that it had swallowed a valve seat, as the number five cylinder had no compression at all. I planned to do a quick repair so we could drive the car for the summer. You all know how that turned out. 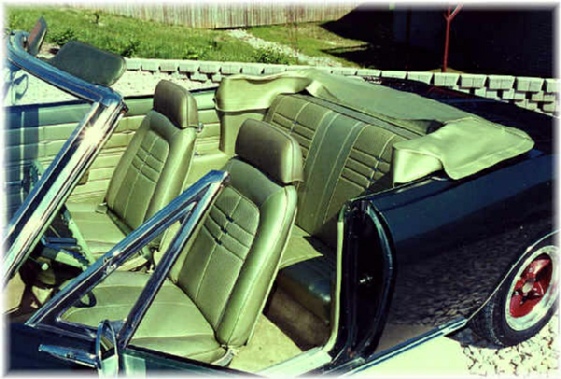 This is the rebuilt engine installed in the car. As you can see, I added a bit of chrome and individual air cleaners for the four carbs. For this I had to route the crank case vent into the air cleaner base, shown upper right. This was easy because I had to extend one of the air bases to clear the throttle linkage. It was done with a piece of exhaust tubing, with right ID to fit over the carburetor. 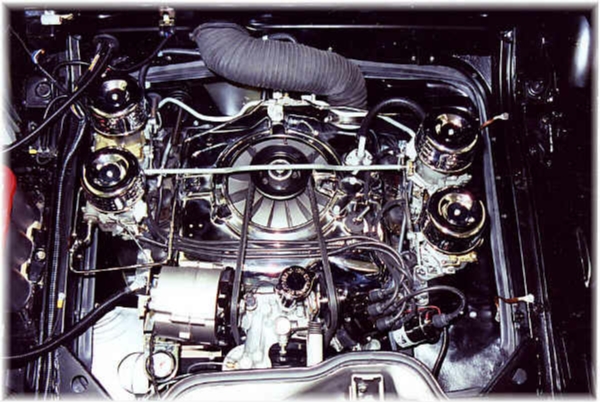 This was the first convertible I’d ever owned and I thoroughly enjoyed it!….. And I missed it. I sold it to finance my newest  Corvair project, it went to a good home. 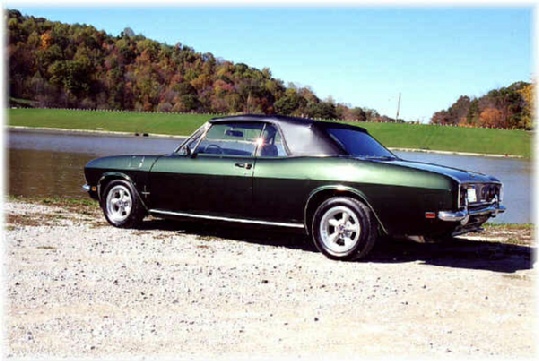 Over 6 years of work went into this project, a full restoration of a 1966 Monza Crown CORV 8. Originally converted to mid-engine power in the early seventies, the card did not look like much when I got it. This picture was taken the day after the car debuted in the Concours event at CORSA’s 30th national convention in Daytona Beach FL. The CORV8 scored 95.68, receiving the gold award and promoted it to the Senior Division. 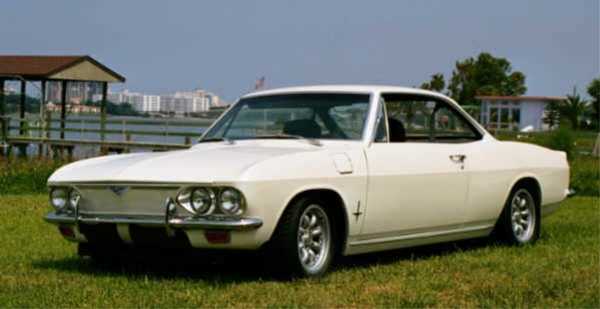 As you can see, this is quite a different animal than a stock Corvair flat six. Starting with a 300 hp, 350 cubic inch, fuel injected, small block engine.

The car came out of the paint shop only three weeks before the CORSA convention. It took three weekends of furious flogging to get the car ready for the event, but we made it.

One of the speakers at Daytona was Smokey Yunick, the legendary wizard of Chrevolet small-block high performance development. It was a real pleasure to meet “The Smoke” at the Corvair Society of America kiosk. Later, I took a cruise to his “Best Damn Garage in Town”, just  a few minutes from the host hotel where I snapped this picture. Note the smaller sign hanging off the “Smokey’s Automotive Service” sign. Imagine a young mechanic having the opportunity to walk in and apply for the “maintenance man” position. Smokey passed away in 2001 and following his wishes, the property was sold in 2006. A condo now stands there. 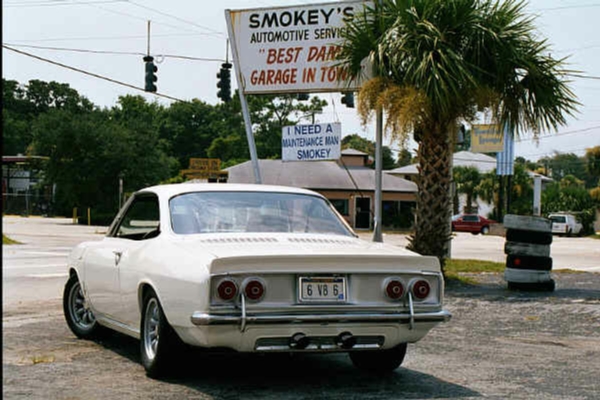 If you would like to see what the CORV8 looked like when I bought it and what went into the restoration, check out the extensive article on Gary Aube’s site: Norris Crown V8 .

I sold this car in August 2007, another Corvair dream realized. 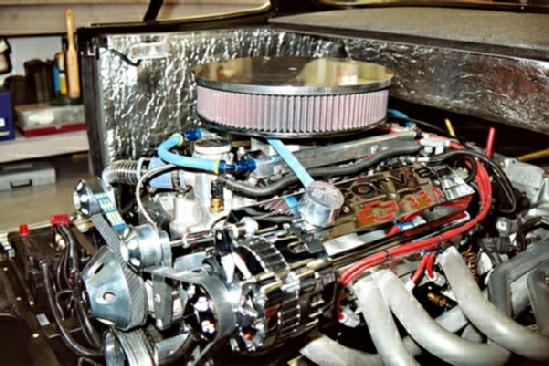